What is an Automated Guided Vehicle? 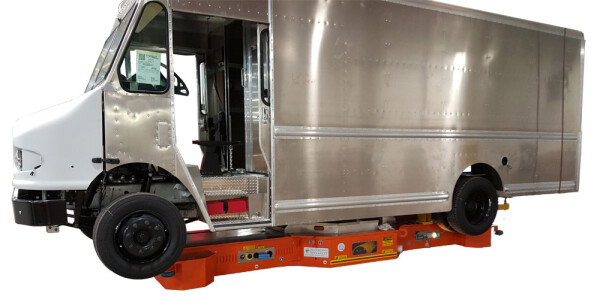 An industrial automated guided vehicle working principle is built to withstand very heavy loads as in Truck Outfitting assembly plants, which carry the frame through the assembly process. These AGV’s almost always require a custom design with tooling options in order to work with the assembly or manufacturing plant’s specific applications.

No longer are plc based automatic guided vehicles built to follow fixed tracks which were traditionally built into the floor of a facility to guide the vehicles, but rather magnetic tape or QR coded tape via the AGV’s laser guidance system. Unlike tracks built in to the floor, the tape allows for easy and affordable reconfiguration of the facility’s floor operations.

AGV systems have several drive motors to allow for specialized steering such as zero-radius turning, diagonal, left, right, backward and forward movement which offers extraordinary maneuverability within any factory space. AGVs are battery operated, which also include a manual option for bringing the vehicle off the line for charging or maintenance tasks. They are usually fitted with motion stop sensors and kick stops for added safety. Each AGV is programmed to follow a course set by the QR coded tape as well as obey pre-programmed speeds to further customize the client’s specific applications and assembly needs.

An AGV system is designed with multiple safety features which offer exceptional traffic control within a facility through collision-avoidance capabilities with the use of audible and visual alarms, motion sensors, E-Stops, and laser guidance. An automatic guided vehicle is an excellent addition to any busy operation in the manufacturing industry. Benefits include heightened safety, ergonomics, efficiency and flexibility in floor layout design. An AGV can be built to hold and carry virtually any weight capacity and with advancements in motion control, the AGV of the future is already here.

Where are Automated Guided Vehicles used?

AGV's offer exceptional accountability once a product is loaded onto an AGV minimizing misplaced product. Where labour costs tend to increase and change quickly depending on multiple conditions, an automated guided vehicle system's costs can be very predictable and its path changed as production and handling needs evolve.

Automated Guided Vehicles have smooth acceleration/deceleration, handling products gently, reducing product damage, perform repetitive movement tasks predictably, and because of their reliability AGVs improve scheduling capabilities and the efficiency of operations while additional AGVs can be added to expand capacity and throughput in any assembly, manufacturing or warehousing operation.

For examples of an industrial AGV in application you can visit Handling Specialty’s Youtube pages and learn more about the AGV system on the website’s AGV Case Studies.