Many MRO plants include four post lifts into their facilities to efficiently and ergonomically perform repairs and maintenance on vehicles like forklifts and trucks. For example, they are popular in the commercial auto repair sector but are found in every industry. Four post lifts boast stability and strength for their robust design. Stability means a higher load capacity and safer operation. 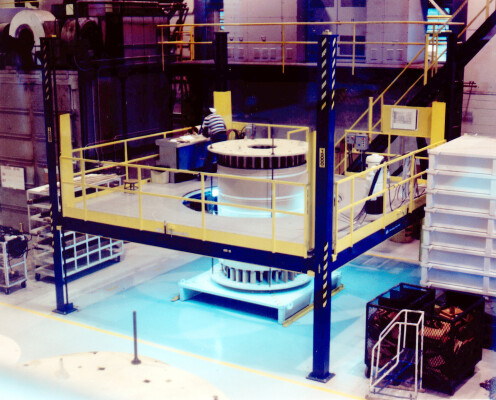 Free Standing four post lifts are often engineered with large lifting screws at each corner, driven electro-mechanically via the control panel or handheld pendant. These lifting screws ensure the platform remains level as they move in tandem with one another.

Four post lifts can also be engineered to lift with chains. This design raises and lowers with heavy-duty chains, offering a reliable cycle through the lift and lower process.

The operator can stop the lift and lowering of the platform at any height to ensure the most ergonomic position. The 4 post lift is also outfitted with multiple safety features, including fall-safe protection, E-stop, visual and audible alarms, and limit switches.

A freestanding four post lift is fixed to the factory floor to increase stability and safety when lifting heavy capacities. A moveable 4 post lift can be transferred from one area to another should the factory floor or assembly line require a redesign.

Custom four post lifts create an exceptional working experience and require very little maintenance. Capacities and lift heights are all dependent on the 4 post lift’s application requirements. Tilt features where two parallel posts lift and lower while the other two remain fixed are also available when requested. Options can seriously improve the efficiency of the lift and should be discussed with your technical salesperson. The wide area of access standard with a four post lift allows customers to perform many duties.

Comparing the 4 post lift against a 2 post lift is like comparing apples to bananas. Two post lifts are nowhere near as stable or safe in any application. Four post lifts are by definition the clear choice where lift capacity and safety are concerned. They take up twice the space a 2 post lift would and cost twice as much but offer so much more in durability and peace of mind.

The stability factor is a key selling point of the 4 post lift. The increased stability allows for the support of small and large vehicles or products.

The 4 post lift can be used in a variety of roles. Perhaps its best-known usage is as a four post car lift. These units are an excellent option for maintenance and repair work on any vehicle ranging from motorcycles to RV’s to tractor-trailers. In this capacity, a four post lift would include a ramp for easy loading and unloading.

Another widespread use of the 4 post lift includes the assembly and manufacturing industries where the lift suspends a piece of equipment, like, for example, an aero-engine as it goes through its assembly processes. In this example, the engine would be moved from work cell to work cell via an automated guided vehicle (AGV), and the four post lift would elevate the engine with specialized tooling for the technicians to work on it.

This same example is seen in the power generation manufacturing of diesel engines, where the massive engine is supported by a rotating assembly hanging from the four post lift. In this capacity, technicians can control the rotation to reach any part of the engine for assembly purposes. The energy industry also uses 4 post lifts to assemble turbines vertically.

Four post lifts also include personnel lifts that bring technicians to heights required to meet their tasks. These lifts can be found in nuclear power plants and are built large enough to take on parts and product for change out processes.

4 post lifts are also used in the insurance industry as moveable ceilings for fire testing and other high-risk scenarios that require a resilient platform for testing insurable materials and the optimal height for sprinkler systems.

Rail assembly is another industry that uses 4 post lifts extensively to test and assemble railcar bogies - also called wheelsets or trucks. In these facilities, 4 post lifts must be built to stand the rigors of heavy industry and stand up to the stresses of an extreme working environment.

Theatre four post lifts are a staple in the industry to elevate people and props on stage. There can be one or several per stage, usually built to conform to a particular play or musical.

For more information on the Four Post Lifts or other solutions

No matter your industry, a four post lift can be customized to fit your specific application needs through careful consideration by Handling Specialty's technical sales reps.

As with any piece of material handling equipment, a four post lift is compatible with IIoT industry 4.0. Handling Specialty can program the unit to report any problems and alert customers to planned maintenance and other issues which may turn up over many thousands of cycles.

Four post lifts are a versatile material handling installation and an important product for many industries looking for an ergonomic and efficient piece of equipment.

For more on what a Handling Specialty, custom 4 post lift can do for your operation, contact our sales manager.