Handling Specialty worked with Lockheed Martin, a major aerospace/defence company in the US, to custom engineer and manufacture a material handling system that would move highly sophisticated wing assemblies for the F-35 Joint Strike Fighter along an assembly line in their Fort Worth, Texas facility.

One part of this system is the transport dolly. The dolly is a mobile platform fitted with a scissor lift capable of holding, elevating (vertical position) and then tilting and holding the wing at 90 degrees (wing in horizontal position), once it has entered the vertical assembly platform (also engineered and manufactured by Handling Specialty). Handling Specialty carefully engineered this lift to safely and steadily hold this valuable and technologically sophisticated wing assembly in an offset center of gravity position.

The wing is loaded onto the dolly by overhead conveyor, using tooling that attaches to the lift. The dolly is then towed by an AGV under the vertical assembly station, where the lift rises through an open section in the platform. Once the wing has cleared the platform deck, the lift tilts the wing 90 degrees, so technicians can continue its assembly.

To ensure safety and accuracy, the dolly is equipped with locator pads on its sides to allow for positioning of the dolly within +/-.125” once it is docked. The docking station (also engineered and manufactured by Handling Specialty) is composed of a guide rail datum pad, a rail with spring bumpers, a wench and a bump crane. 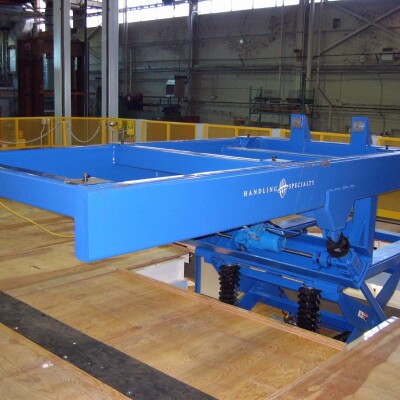 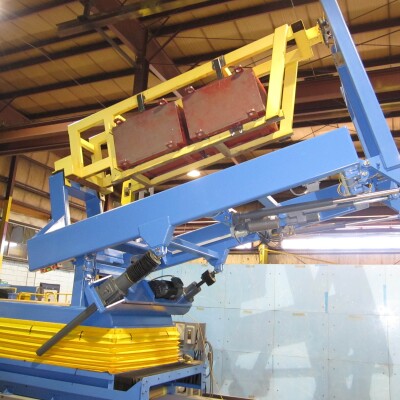 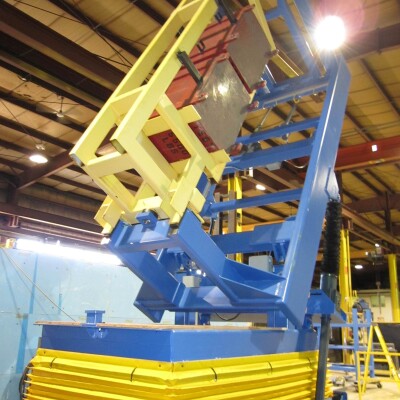 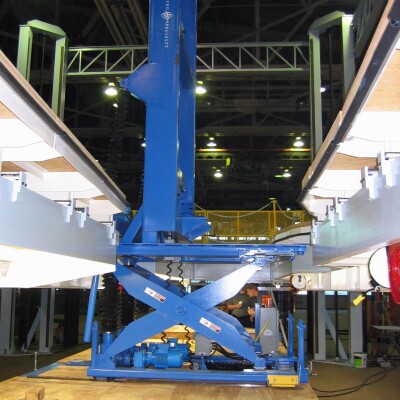